Serbia is one of the countries with the most rigorous measures taken due to the COVID-19 pandemic, introduced after a state of emergency was declared exactly a month ago. With the introduction of state of emergency, the authorities are also able to limit certain human rights, such as protection of personal data, right to information, but also freedom of movement and assembly – which makes it necessary to establish a clear boundary between limitations and violations of human rights in a state of emergency, according to the experts EWB talked with.

Lawyer and Executive Director of the Open Society Foundation Serbia, Milan Antonijević, says that when looking at the introduced measures from a human rights perspective – there are challenges, and that any restriction, such as freedom of movement, is something that must always be commensurate with the goal that wants to be achieved.

“Proportionality must be taken into account when it comes to all measures implemented during this period. Therefore, it would be good, as there is confidence in the medical profession and their advice from those who are working on ensuring that human rights are respected, to also have the confidence of doctors in fact that without full respect for human rights, none of the measures will produce good results. This means that trust should be two-way. With all the restrictions that the Constitution allows, even in the most severe cases such as during the war, the legal system is still maintained, and all human rights restrictions must be based on the Constitution. If it is something that can cover a situation such as a state of war, it can certainly also cover the situation we are in today, which is a state of emergency due to COVID-19,” Antonijević points out, adding that he hopes that there will be much more understanding for the profession.

He states that in the past few days, unfortunately, we have seen doctors say that during the pandemic there are no rights, that everything can be done. “It is rather irresponsible and shows a truly basic misunderstanding of the legal order, institutions and everything that must now be in much more perfect shape than ever before and must function not only at the central level, but also at the local level,” stressed Antonijević.

Antonijević agrees that matters of the right to a fair trial and the extent of restrictions on freedom of movement can “be questioned whether and to what extent they were and are justified.” He stresses that one should always be careful and take care of the entire legal system, because it is not possible to choose which part of the legal system you want to respect.

“If you start to violate rights, it is something that can very easily be extended to the entire legal system and give the opportunity at both local and other levels to violate citizens’ rights. It is good that colleagues are monitoring the situation and responding to it, given that you have several initiatives to review constitutionality,” Antonijević says.

Namely, the Belgrade Center for Human Rights (BHCR) filled an initiative with the Constitutional Court of Serbia to review the constitutionality and conformity with the European Convention on Human Rights of the Order Restricting and Prohibiting Movement of Individuals in the Territory of the Republic of Serbia enacted by the Ministry of the Interior during the state of emergency, it is stated in a press release. 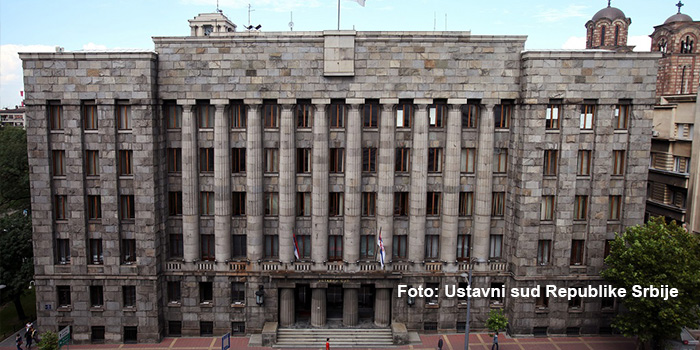 “The initiative deals with the foreseen possibility of double punishment, criminal and misdemeanor, of persons who break the prohibition. Although the minister’s order stipulates that non-compliance with the imposed bans will be punished as a criminal offense – in accordance with the Criminal Code and as a misdemeanor – in accordance with the said regulation, there is no justification for citizens who violate these bans to be punished twice,” BHRC stated, reminding that the Serbian Constitution (Article 34) and Protocol 7 together with the European Convention on Human Rights (Article 4) guarantee the principle of ne bis in idem, i.e. that no legal action can be instituted twice for the same cause of action, a principle which cannot be waived even during a state of emergency.

“I would not say whether they are or are not violations, I think this argumentation is good enough, but I would appeal to the Constitutional Court to take it seriously and to make quality and well-founded decisions as soon as possible. Because now, in fact, it is the first real response to a pandemic, but also the real answer to what Serbian society will look like after the state of emergency is over and whether we will have institutions and preserved systems in place that will protect citizens,” Antonijević points out, adding that this is especially important because after the pandemic is over, much more attention will have to be directed towards the economic and social rights that will be threatened by the economic crisis.

There are responses to certain violations

Certainly, Antonijević points out that there are violations, but that it has been responded to them, as was the case with the already repealed order from Bor, which instructed all civil society organizations in Bor to make all human resources available to the Crisis response team.

“It represents the misunderstanding of rights, of the Constitution, it is something that resembles forced labor and it is good that something like that has been abolished. That is why it is good to monitor the situation at every level – both at the Government and local level, because different interpretations of measures are noticeable at a local lever,” says Antonijević, adding that the second case was an attempt to violate media freedoms by the Government’s Conclusion on informing the population about the condition and consequences of the infectious disease, which centralizes information and gives the right to publish information related to COVID-19 only to the Crisis response team. However, the conclusion was withdrawn in the short term and Antonijević cites that as a positive example of listening to the profession.

“Still, the profession is not widely trusted, the authorities act reactively. It can be seen that some decisions that are made both locally and at the national level do not pass the filter of human rights and in general, justification, at all. I do not know what should be forgiven because of the tempo in which things are developing, but not much, and especially not now after many weeks passed since the crisis began. Human rights are not something we can scorn in this period, and there is no need for it. Within truly broad constitutional permissions and capabilities during the state of emergency, everything can be regulated legally,” emphasizes Antonijević.

Golubović adds that the right to information can be restricted, but it is certainly not desirable.

“The consequence of arrest of Ana Lalić was precisely preservation of right to criticize. In its instruction, the Council of Europe called on countries to preserve this right, as a very important right in this period,” says Golubović.

A journalist of Serbian Nova.rs portal Ana Lalić was arrested on April 1 because of her article about lack of adequate protective equipment for medical workers in the Clinical Centre of Vojvodina (KCV), which has denied the allegations and pressed charges of “causing panic and unrest”. Lalić was released the next day, but nevertheless, her laptop and mobile phones have been kept by the police which has raised public concerns that the police wants to find out who were journalist’s sources from the KCV. 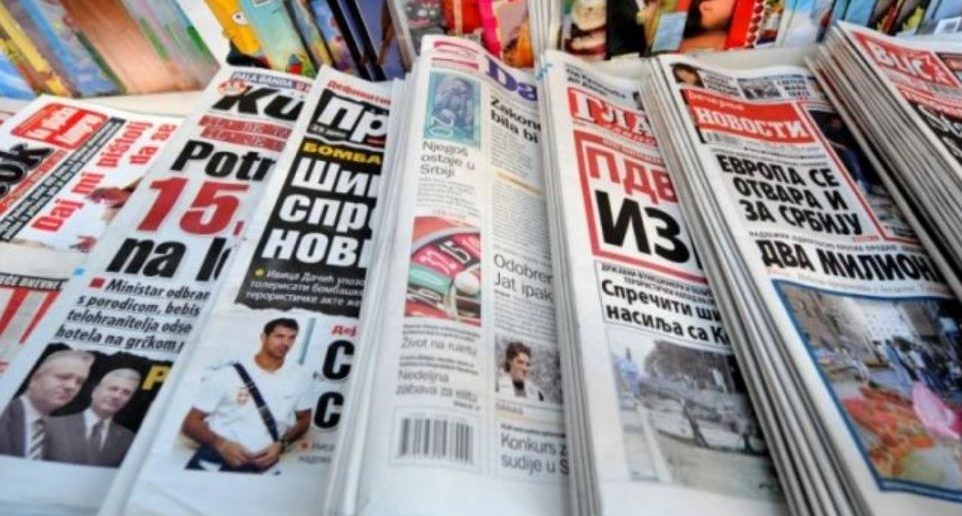 However, the arrest of the journalist was not the only arrest that provoked public reaction. Artist Jovana Popović from Kikinda, who became known to the public as the author of the anti-regime song “Scum”, was arrested 10 days after she came from Montenegro on March 14, one day before the introduction of state of emergency, for allegedly violating a measure of mandatory home isolation. However, she claims that neither at the border or after returning to Kikinda, no one has informed her that she must be in isolation. Popović was only released from custody on April 13, although numerous civil society organizations and parties demanded her release, reminding that the provisions and laws could not be retroactively applied.

The Council of Europe has issued a toolkit for all 47 member states, i.e. Information Documents on respecting democracy, rule of law and human rights in the framework of the COVID-19 sanitary crisis, in which it is stated that any derogation must have a clear basis in domestic law in order to protect against arbitrariness and must be strictly necessary to fighting against the public emergency. States must bear in mind that any measures taken should seek to protect the democratic order from the threats to it, and every effort should be made to safeguard the values of a democratic society, such as pluralism, tolerance and broadmindedness.

It is necessary to emphasize that not only declaring a state of emergency is the basis for limiting human rights – declaring a pandemic and emergency situation is sufficient to allow for the possibility of restricting some human rights, including movement.

“It is true that there are two legal ways of introducing a state of emergency, where the regular way is the proclamation by the National Assembly. It seems to me that we are slipping on the border of separation between what is allowed and what is not allowed the whole time. The Constitution says that the measures are valid and that the Assembly approves them when they meet. What is much more of a problem than the way it is proclaimed is the fact that the Assembly has not exercised its control function for a month,” highlights Golubović. 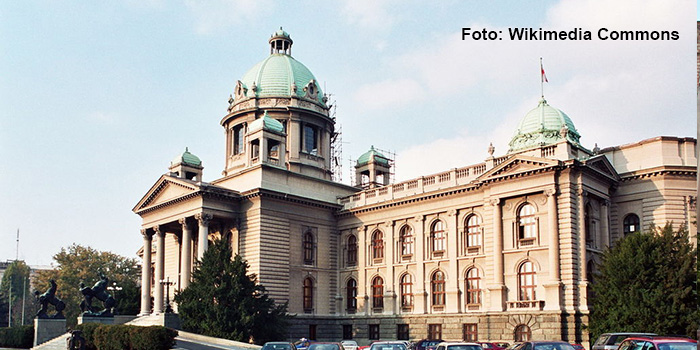 Antonijević agrees and adds that the control function that the National Assembly has is to be used as much as possible in a state of emergency, and therefore emphasizes that he does not see why the Parliament would not be able to make decisions on a digital platform and thus include a third branch of government, given that in some other areas such as the judiciary, we have quickly adapted and switched to digital, such as the government making decisions via online platforms or courts working through Skype.

“I consider this to be the first message that should be sent, as this is not something that will last for a short period of time, challenges will continue to occur. You have also seen for yourself that life brings about some issues that we have not thought about in the past. Starting with what will happen to children whose parents are infected and placed in hospitals. These are all key issues for which it is good to have a legal basis,” Antonijević points out.

The consequences of the actions of those responsible during state of emergency will not disappear after it has been abolished. The question is at what pace the reduced level of human rights will be restored. Antonijević concludes that everyone should ask themselves what rights they are interested in, which ones of his/her rights have been violated at this moment, and “understand that if one right is violated it will be very easy to violate all others”.