Serbian lawmakers have adopted a long-awaited law they say will shed light on the mystery of hundreds of missing babies more than 30 years ago, and offer compensation to parents where the fate of their child cannot be determined.

In the 1970s and 1980s, hundreds of Serbian babies (some advocates say thousands) mysteriously vanished from hospitals and birth clinics with no explanation or proof of death.

However, parents of missing babies have been protesting the new law, saying they weren’t  included in the process to draft it and arguing its purpose is to pay out the families rather than establish the truth.

Mirjana Novokmet was 19 when she was told at a Belgrade clinic that her baby was stillborn. Forty years later, she’s still searching for answers.

“I am hoping that he is somewhere alive,” she said.

“I believe someone had taken him, sold him, within the country or outside the country. I really can’t tell, but I am certain that he is alive.”

The bill passed on a 136-0 vote in the 250-member assembly, with two lawmakers abstaining. An ongoing boycott of parliament sessions by opposition, among other reasons, contributed to the high number of absent lawmakers.

The law resulted from a 2013 European Court of Human Rights ruling, which demanded that authorities create a mechanism to provide answers to parents.

It requires specially-trained police officers to carry out investigative work into the disappearances, and where the fate of the missing babies cannot be determined, give families compensation of up to 10,000 euros ($11,000).

According to Katarina Golubovic, spokeswoman for the Lawyer’s Committee for Human Rights, the Government adopted amendments to the bill as a result of pressure from advocacy groups and to placate the families in the lead-up to the general election in April.

“The opposing of the parents is seen as a negative effect for the campaign.

“However, despite the reasons for the adoption of new solutions, we can say that these new solutions have potential to return the lost trust in the state, since the state will give the opportunity to the parents to be part of the interdisciplinary commission that will investigate cases.”

Since 2002, several groups of parents with similar cases have banded together to compare documentation to uncover the truth.

Parents were issued with death certificates without any other proof of death and were denied access to their children’s bodies. In most cases it was the firstborn child of a young, married couple that disappeared and in many cases the same doctors were involved.

Novokmet says the frequent reappearance of names of certain doctors and registrars leads the families to believe the babies were taken by an organised criminal group.

“It is interesting that we have been fighting this battle for 17 years and the state turned a blind eye,” she said. 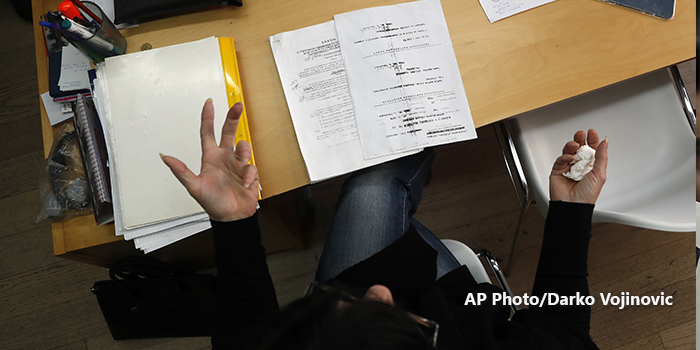 Mirjana Novokmet has been pursuing her case for decades.

Mirjana Novokmet has been pursuing her case for decades.

Advocacy groups representing the families say the law has a number of problems, including that it doesn’t include all medical institutions, that parents are required to gather evidence rather than the court, and it doesn’t include the capacity for children who suspect they are one of the missing babies to seek answers.

Parents of missing babies this week protested outside Parliament in Belgrade, demanding to be included in the drafting of the law.

They claim to have sent 130 appeals and suggestions over six years, which they say have gone unanswered.

One of their key objections is the compensation if a case could not be solved, saying that no parent would accept money in exchange for answers about their missing child.

“I think no mother can agree for 10,000 Euros, because hope for the truth about my child cannot be bought,” Novokmet says.