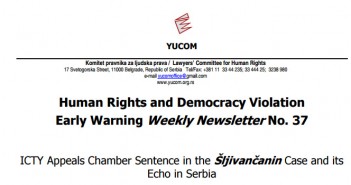 The Appeals Chamber of the International Criminal Tribunal for the former Yugoslavia (ICTY) passed May 5, 2009 the final judgement in the Šljivančanin case of war crimes on the „Ovčara” farm near Vukovar, where 194 prisoners of war, including sick and wounded patients of a hospital, were executed in November 1991 . The original sentence was increased from five to seventeen yaers. 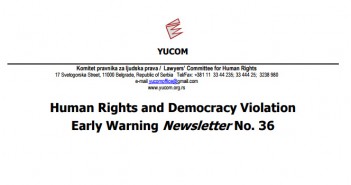 Following an initiative moved by the municipal Commission on Renaming Streets and Squares to name Južni bulevar (Southern boulevard) — a blind alley on the outskirts of the southern Serbian city of Niš — after Šaban Bajramović, a world famous Roma singer who recently passed away in bitter misery, a group of dwellers signed a petition against the initiative. “Arguments” they used to support their step — such as the claim that renaming their street would necessitate changing personal documents — could not serve even as rationalization to camouflage the naked racism they are inspired by. The inhabitanst of that putrid little “street” that for incomprehensible reasons was called a “boulevard” openly insisted that they had nothing against that a street — but not their street — bears Šaban Bajramović’s name and suggested that another street be picked, preferrably in the slum area “where he used to live and where his people live today”. They thereby insisted that they were no nationalists and had nothing against Roma people. 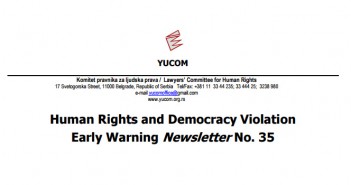 The overthrow of Milošević brought about negligible changes in Politika: whereas only few top editors and managers were removed and replaced by more moderate „professionals“, the entire team of editors and journalists „inherited“ from Milošević remained in place and adapted to the new political and business climate. The extent to which these changes were cosmetic was to be recognized only after the assassination of Prime Minister Djindjić in March 2003 and the restoration of much of the Milošević value system under Prime Minister Koštunica (2004-2007 and 2007-2008), assisted by President Tadić’s Democratic Party (DS) : Koštunica gained control over key ministries and other pillars of the system – Politika included. After Koštunica’s departure from power, Serbian part of the Management, as well as Chief Editor Ljiljana Smajlović and some members of her team were replaced in October and a new team installed in November 2008. The „hard core“ of Politika-„professionals“ stayed on. 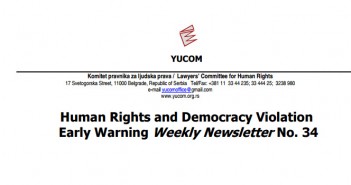 Council of Europe’s Commissioner for Human Rights, Thomas Hammarberg, paid an official visit to Serbia from Oct. 13 to 17, 2008. An extensive Report on that visit and a broad range of talks he has had with representatives of government authorities and nongovernmental organizations was published on March 11, 2008 on CoE’s website .
The Report abounds with facts, useful information, assessments and recommendations concerning the human and minority rights condition in Serbia today. 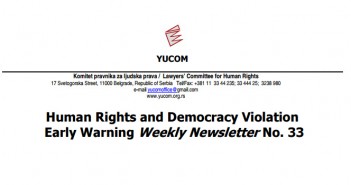 At a request of the Serbian Orthodox Church (SPC), the Government of Serbia withdrew on Wednesday, Mar. 4, 2009 the Draft Law on the Prohibition of Discrimination (hereinafter: Anti-Discrimination Law) from the parliamentary procedure.

Apart from the fact that it belongs to the legislative package to enable Serbia’s inclusion into the “white Schengen list” and enable its citizens visa-free travel to EU and some other European countries, the Law represents one of the pieces of legislation most essential for the further development of democracy and respect, uphold and protection of human and minority rights, change in the value system and acceptance of equality as a condition for the functionality of the system. This Law contributes to the harmonization of Serbian legislation with the standards enshrined in numerous international instruments and the European Convention on Human Rights 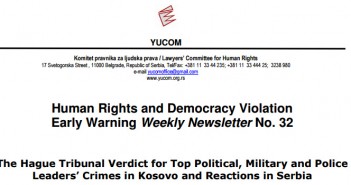 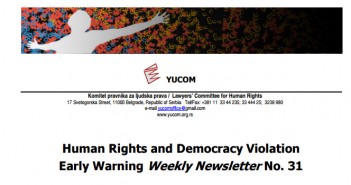 The activities of the Lawyers’ Committee for Human Rights are aimed at the realization of the principle of rule of law and democratic values in Serbia.

Through its legal aid, YUCOM is leading strategic cases before Serbian and international courts in order to help us find and target errors within the system in Serbia related to human rights violations.

A democratic society in Serbia is possible only if all causes and consequences of the crimes committed on our behalf in the wars led in former Yugoslavia are acknowledged and valued in a correct way. This means that the state and the political elite must clearly distance themselves from the crimes committed on Serbia’s behalf, thus sending an unambiguous message to the citizens about what represents socially unacceptable behavior. This goal will be achieved not only by punishing those who committed the crimes – which is the most important precondition – but also by not denying, justifying or glorifying crimes.

YUCOM’s activities in the area of human rights presents the realization of rights proclaimed by the Declaration on the Right and Responsibility of Individuals, Groups and Organs of Society to Promote and Protect Universally Recognized Human Rights and Fundamental Freedoms adopted by the General Assembly UN on 8 March, 1999.