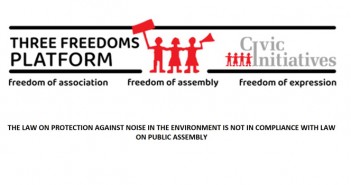 Organizations gathered around the “Three Freedoms” platform caution the National Assembly and the Serbian public that the Law on Protection against Noise in the Environment, adopted yesterday in the parliamentary procedure, is not in compliance with the Law on Public Assembly and international standards governing the right to freedom of assembly. At a time when a large number of public debates are taking place in Serbia on changes to the laws that affect the rule of law and human rights, leaving a very short deadline for analyzing regulations and sending comments, the Serbian government’s proposal restricting the right to public assembly went almost unnoticed.