When A.M. fell victim of discriminationseveral years ago, she did not know who she could turn to for help. She had been enduring insults and was persecuted for years before she decided to take her friend’s advice and make a phone call to an NGO from Belgrade. At the time, she knew little about those organisations, let alone what they were dealing with; yet, she tried to receive legal aid from the Lawyers Committee for Human Rights (YUCOM) http://www.yucom.org.rs . A.M. has found success and she is no longer the subject of discrimination and is one of many citizens of Serbia, who have managed to protect their human and civil rights by utilising YUCOM’s aid.

In the period since it was established in 1997 to date, the Lawyers Committee for Human Rights (YUCOM) has turned into an internationally recognised professional organisation, whose activism in the field of protection of human rights has given them a status of supporters of ‘small people’ (victims of torture, discrimination and domestic violence, internally displaced persons and refugees, conscientious objectors to conscription), but also of institutions (protection of independence of the University, freedom of media, etc).

Over the last decade, the attorneys and lawyers of YUCOM have pioneered several legislative initiatives and have participated in shaping numerous provisions, regulations and amendments in Serbia. Even nowadays, they campaign for the adoption of laws and regulations, and exert pressure on the state authorities to respect their commitments to national and international contracts and regulations. They resort to constructive criticism from authorities, control public activities of politicians and advocate independent judiciary.

A group of legal specialists and interns advocatethe promotion and respect of human and civil rights and freedoms, and informing of citizens of their rights; it also develops cooperation with other associations and organisations that are active in the field of promoting civil, political, human and union rights and freedoms. Activities of YUCOM in the field of human rights are demonstrated by implementation of rights arising from the United Nations’ Declaration on Human Rights Defenders.

NGOs in Serbia may receive legal aid from YUCOM attorneys and lawyers in case of threat and assault against human rights activists, i.e. human rights defenders. YUCOM offers free legal advice to victims of torture, discrimination and domestic violence, both in the field of domestic law (exercise of parental right, dissolution of marriage etc.) and in resolving property-legal relations stemming from divorce proceedings that result from domestic violence. YUCOM’s lawyers have provided free representation for victims of violence in the most drastic cases, both before domestic courts and international bodies such as the UN Human Rights Committee and the European Court of Human Rights.

Over the last several years, there are numerous programmes and activities in the field of human rights, which have been implemented in YUCOM, including the Legal Aid Call Centre, Legal Aid Free Access to Information, Legal Aid to Victims of Domestic Violence, Promoting the Seven Standards of Public Life, Monitoring of Trials (www.facebook.com/pages/YUCOM-Lawyers-Committee-for-Human-Rights/134933596542556). All activities have a common objective – the promotion and protection of human rights in Serbia.

The Call Centre has been active for three years now and it has provided free legal aid and counselling to more than 1.000 people, with the number of calls climbing on a constant rise. Citizens have mostly complained about different forms of discrimination, torture, domestic violence and issues that pertain to labour law. One of the cases with major media coverage was the case of Jabuka Village, where Romas living in the village were openly exposed to violence and where one Roma family was receiving threats. It is interesting to note that the trial proceedings pertaining to threats of life were completed in record time of less than three months, says Milan Antonijevic, director of YUCOM.

Although the training on standards in public life was organised at the end of 2011on the premises of Jagodina City Hall with the consent of the mayor and was attended by a number of city councillors, it was the mayor of Jagodina, Dragan Markovic Palma, who was awarded the champion title of YUCOM’s first competition for the high ranking official committing the most breaches in standards of public life in 2011.

YUCOM also offers legal aid in the field of exercise of right to free access to information of public importance. Citizens exercise this right in terms of information in possession of state authorities and agencies, which are contained in specific documents and pertain to all issues the public is rightfully interested in.

‘Free legal aid to citizens also relates to writing complaints to the Commission for Information of Public Importance. Although the state is now more open and willing to cooperate with NGOs, once you stop reminding them what needs to be done and that they must stay open, they close down’ Antonijevic says.

He believes that it is necessary for the state to change its penal policy and to speed up the process of rendering of verdicts, as it would contribute to the certainty of punishment. ‘New generations of young people are coming, yet they don’t have the full understanding of the concept of discrimination and human rights and they need to be educated in that regard’, Antonijevic explains.

With the support of the Office of the Vice Prime Minister for European Integrations and the Social Inclusion and Poverty Reduction Team, backed up by international financial assistance, in 2011 YUCOM and its partner organisations have continued to successfully promote the seven standards in public life – Unselfishness, Objectiveness, Responsibility, Openness, Integrity, Honour and Personal Example. This unique project has been implemented since 2007, aiming to build capacity in new, local NGOs that would be dealing with the protection of human rights; it is also utilised in providing assistance to other organisations in order to succeed in their struggle for a consistent respect of human rights and monitoring a respect for standards in public life through the establishment of sustainable monitoring and control mechanisms. In the United Kingdom, the seven standards are part of the competencies of the Committee on Standards in Public Life, an independent body that was established by the government in 1994 to make sure that state officials and public servants respect these ethical standards.

‘Because of the result of openness in modern democratic society and the active role of the public and citizens, we sense an ever-growing demand for ethical responsibility as a form of an additional responsibility for holders of public office and civil servants. The public has become less condescending to holders of public office, hence the increase in their expectations for officials acting and behaving properly, i.e. high standards of ethical behaviour’, Antonijevic says.

Several trainings were held in cities in Serbia as a part of the project Promoting Seven Standards in Public Life, where attendants were trained to monitor implementation of standards in public life in their respective communities. YUCOM has received information on the violation and disregard for standards in 2011 both in local communities and at the national level; YUCOM will be monitoring closely to what extent politicians abide by these standards in public life.

One of the most recent activities that has been organised by YUCOM specialists and implemented in cooperation with the Gay Straight Alliance is related to the criminal act of Hate Crime. State institutions have received an initiative for the introduction of hate crime in the Criminal Code of Serbia. The initiative for amendments to the draft of the law, devised by these two organisations, contains the definition of the offence and proposed amendments to certain articles of the Criminal Code, so that the motive for hate is taken as an aggravating circumstance, thus requiring a harsher penalty. This does not relate to murder, grievous and minor bodily harm, rape, property related offence and criminal offence against the general safety of people and property.

Results of the partnership between NGOs and the state will be visible in spring, when the ‘House of Human Rights’ is to be opened in Kneza Milosa Street together with the premises for five other NGOs, including YUCOM. The house is intended for joint implementation of projects and cooperation in the field of the protection of human rights, local democracy and the rule of law.

Milan Antonijevic underlines that the ‘House of Human Rights’ will be a completely open space and that citizens will be provided with all aid necessary. The premises will contain a functional library of human rights and will be used for public lectures, forums, exhibitions. ‘The fact that the City of Belgrade has been actively involved in this project shows that the respect for human rights is now being taken seriously and that further investments will be made to creating an efficient system for the protection of civil human rights’, says Antonijevic.

‘Houses of human rights exist in developed countries, where these rights are fully respected. Thanks to this, citizens will certainly be encouraged to report any violation of human rights’, says Antonijevic and explains that further pressure will be devised and exerted on those violating the rights from this place that will also be proposing amendments to laws and their application in real life, thus improving the situation in this field.

Owing to their vast experience in the struggle for the protection of civil and human rights they have constantly been in for 13 years, YUCOM will continue to contribute in creating a new system that will not merely be correcting injustices done, but will actively prevent the deprivation and violation of human rights and freedoms in the future. 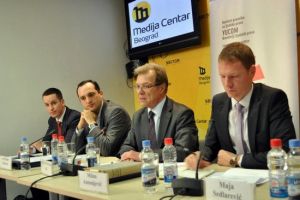 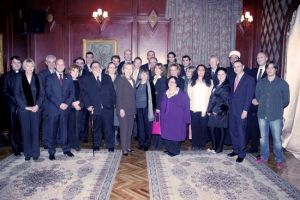 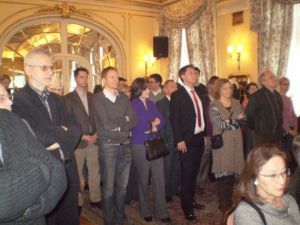 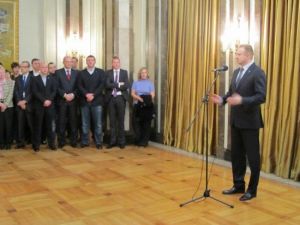