Lawyers’ Committee for Human Rights – YUCOM implemented this project with the support of Partnership for Transparency Fund (PTF) and the Open Society Institute.

Serbia still ranks as one of the most corrupt countries in Europe according to the Transparency International’s Corruption Perceptions Index (in 2010, Serbia ranked 78th out of 178 countries (followed with 86th out of 182 ranking in 2011 and 80th out of 174 in 2012). The latest EC country reports stated that Serbia has made little progress in harmonizing its judicial system with the European standards and that it failed to rein in corruption. One of the key challenges is that there are still no enough criminal reports filed against perpetrators by the prosecutor’s office, mainly because it is often difficult to provide sufficient evidence for reporting a corruption case. Nevertheless, this has often been abused as an alibi for the status quo, i.e. conducting only a symbolic investigation of a case. Another reason why corruption is one of the crimes with the lowest conviction rates is because the suspects are often highly influential individuals and powerful society members, thus making it difficult for the system to convict them. As a consequence, this results in an even lower portion of convictions made by judiciary. The experience of YUCOM and other NGOs with the newly adopted laws shows that their implementation proved to be much more successful if a monitoring mechanism is established as soon as possible, accompanied with appropriate public awareness and media campaign.

YUCOM made efforts to support justice system by monitoring trials for criminal offenses, by opening the debate and conducting the research on the obstacles and preconditions for full, effective contributions of all parties in the criminal proceedings, as well as independent bodies, civil society and the state institutions in the fight against corruption. In addition, we made a comparative overview of practices in combating corruption and evaluation of the effectiveness of the fight against government corruption in Serbia by the authorities of the EU and the CoE, and a review of relevant national and European case law.

After identifying criminal cases to be monitored and creating the monitoring methodology guidelines YUCOM started the monitoring process with numerous attendances to selected court trials corruption criminal offenses. After each attendance made by legal team daily reports on the trial proceeding with focus on acting of judges and prosecutors are being conducted and posted on the website as to make monitoring progression available for broader public. Attending the hearings and involvement of civil society and citizens in monitoring the progress of proceedings of criminal offenses with elements of corruption, YUCOM promoted as a model of legitimate “pressure” on all parties of criminal proceedings in order to have them approaching to their roles with more responsibility.

Six panel discussions were organized in Serbia (Novi Pazar, Negotin, Valjevo, Niš, Novi Sad and Belgrade) where the role of each of the three main actors of criminal proceedings – judiciary, prosecution and the police in combating corruption was discussed as well as the obstacles and prerequisites for more efficient corruption criminal proceedings as well as the communication and cooperation amongst them. Discussions were the places for open dialogue between representatives of the three actors as to build up the communication and cooperation and to talk over the burning issues and all of the difficulties in combating corruption.

The web site was launched (www.antikorupcija.yucom.org.rs). The contents of web site consists of all the basic information on the identified case trials: cases designation, the ruling judges in judging chamber, the crime committed, suspects and accused etc, calendar with dates of appointed public hearings but also lots of additional information including media reports, articles and features about the cases. Trial monitoring progression is provided by posting the daily reports on attended hearings and with calendar of appointed dates for main hearings which is in the focus of the web site. The best practices in combating corruption in EU and region countries concerning the role of judiciary as well the comparative practice in corruption trial monitoring also found their place on Yucom’s anti-corruption site. The site contains public announcements of the main anticorruption bodies and judges and prosecutors’ associations on the “burning issues” concerning the work of judiciary and anticorruption measures and policies. Daily reports and accurate update on the up going corruption cases (concerning media reports) is one of the key points of the website where contents are open for comments of the visitors.

YUCOM successfully organized study visit to Slovenia (Special Prosecutor for Organized Crime and Corruption, Judicial Training Centre, Commission for Prevention of Torture and Transparency International Slovenia) and Croatia (Judicial Academy, Ministry’s of justices Independent Sector for Suppressing Corruption and NGO Youth initiative for Human Rights) where judges and prosecutors from Serbia exchanged knowledge and experiences with colleagues on anticorruption practices. Study visits seem to be good opportunity for judges and prosecutors to learn and share experiences with colleagues in other countries with similar heritage or with more progress made in combating corruption, so we suggest this model besides formal exchange of experience during training seminars that could be organized with Judicial Academy.

Final conference was successfully held where first examples of final report (policy paper) were disseminated amongst participants who previously contributed to the six project cities had a chance to exchange opinions on key challenges and crucial obstacles in working effectively in corruption criminal proceedings.

Monitoring the corruption cases trials as the main YUCOM’s mission in 2012 and perhaps further in coming years was also the theme for discussion and comments from stakeholders as well as the role of NGOs and public in supporting or making the “subtle pressure” on judiciary to act with more professionalism and efficiency by attending the corruption court trials. The biggest support to judiciary and contribution of the YUCOM-s provided anticorruption activities we find in detecting the crucial problems in criminal procedure and connected issues in corruption cases, identified during the court hearings and in panel discussions and making corruption trials much more transparent providing information to citizens via our website Anticorruption. Education for judges, court experts, prosecutors and police officers is crucial for better understanding of specific areas where corruption rises and exists. Actors of criminal proceedings noticed that they need more specific knowledge about economic issues, taxes, stock market etc, as to know how to deal with and to direct expertise in non-jurisdictional areas as economics, finances, taxes, civil engineering etc.

YUCOM continues to observe corruption cases and to inform general public on recent circumstances in courts as well as to provide public with different interesting material concerning anticorruption measures including statistics and quality media reports and public announcements. 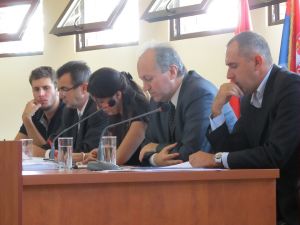 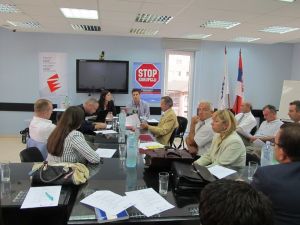 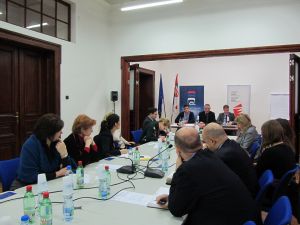