MDTF JSS, in cooperation with the Lawyers’ Committee for Human Rights – YUCOM, conducted a promotion campaign of the Self-Representation Guide, which was jointly developed in 2017.

Citizens are usually unaware of their rights and obligations and therefore have a justified fear in meeting with unknown judicial procedures to them, since the outcome can sometimes have a crucial impact on their lives. The unenviable economic situation and money insufficiency is an additional problem that arises. In order to facilitate them in such situations, the MDTF JSS has developed two guides in cooperation with the Lawyers’ Committee for Human Rights – YUCOM:  „Self-Representation Guide“ and „A Guide – First Time in Court or at a Courthouse“, which teaches of the relevant problems related to the judicial procedures and the procedures before independent institutions in a simple and illustrative manner.

All citizens encounter the judicial system in one moment of their lives. Very often they are even forced to participate in such a proceeding regardless of what their own will is, simply because they have been subpoenaed. In all of this there is also additional fear, because the most often they neither have the knowledge or the experience, and they are therefore entering a field that is completely unknown for them. That refers not only to Acts and Laws, but also to the whole system of norms that are more likely to be unwritten, and that can only be comprehended by years of studying and experience. The purpose of the guides is to bring the judicial proceedings closer to citizens as much as possible, in a way that is comprehensible to them, by using a simplified and reduced language and terminology and all with the intent to make complicate terms and concepts easier for understanding and application. The publications give answers to the questions that citizens usually ask themselves even before they decide to go to court, related to, per example, legal expenses, writing lawsuits, statements, counter-statements and responses to lawsuits, as also hearings, evidences, submissions, access and insight to records, acceleration of the proceedings, judgments and legal remedies. Also, publications provide the answers on what appear to be trivial questions, as per example: „What to bring to court“, ”What to wear” and ”Where is the courtroom situated at?” etc.

Within the campaign that was developed for the purpose of promotion of the Guides, a huge amount of posters and flyers were created and distributed on more than 750 addresses of various institutions, specifically: to all the Courts and Prosecutors Offices, to all Local Self-Government Units, to all Centres for Social Work, to all Cadastres on the territory of the Republic of Serbia, etc.  A huge number of institutions have contacted YUCOM to inform them that they have highlighted the posters in their offices and have kindly requested YUCOM staff for more free copies of the Guide for further distribution, as to the fact that more and more citizens are contacting them with the request to take free copy. 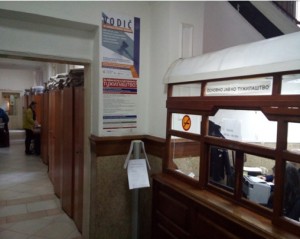 The campaign also includes poster advertisement in Public transportation vehicles as also on billboards in all bigger cities in the Republic of Serbia. 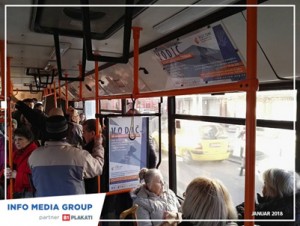 Vehicle of public transport in Kragujevac 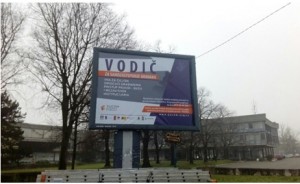 The fact that the Guide has been published on the electronic database of legal regulations, on the website Paragraph Lex, suggests that it has encountered a great interest. 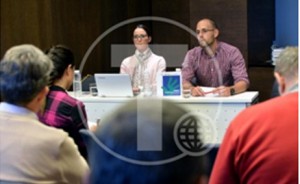 Until now, the conference for the promotion of the Guide has been held in Belgrade, but it has been planned to hold also in other cities in Serbia, so we encourage you to follow the website of YUCOM so that you could be informed if the conference is to be held in your city. You can also find all the information on YUCOMs social networks.

Since the beginning of the campaign which started till mid-December 2017, the Self-Representation Guide has been downloaded from the YUCOMs platform 4,735 times. Since the campaign just starts to be more intense, it is expected that this number will be on the rise.

On a daily basis YUCOM lawyers receive an average of between 5-10 calls from citizens who want to receive free copy of a Guide. This has largely contributed the fact that campaign activities have been broadcasted on national-frequency TV channel. There is an example that TV Happy, which has a national frequency, transmitted in the Morning News information about the Guide and it’s campaign.

Representatives of relevant institutions, including the Ministry of Justice, submitted suggestions for the extension of the Guide. All of their comments will be included in the next version of the Guide.

In addition to promoting Guide at the national level, representatives of YUCOM are trying to promote it also internationally. In particular, it was discussed at the Council of Europe with the Parliamentary Assembly Rapporteur on the Protection of Human Rights and Access to Justice. 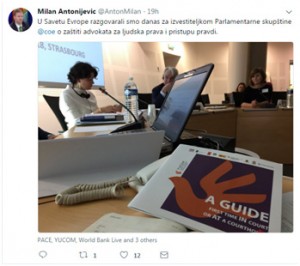 Guides give many examples that illustrate the procedures themselves, but also warn on details that only lawyers know that they do not “imply”. However, what is important to say is that the Guides cannot replace a legal advice that can be obtained from a qualified expert and do not represent the promotion of self-representation. Therefore, Guides contain information on how and where free legal aid can be obtained. If they decide on self-representation or simply want to get to know and understand their rights and obligations, Guides can be downloaded from the YUCOM’s website electronically or can be ordered a free printed copy by calling the number of the organization (+ 381) 11 33-44- 235.