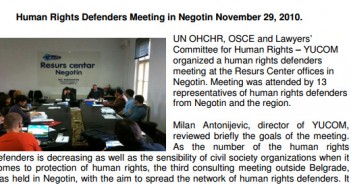 Ruzica Banda, Human Rights Officer at OSCE Mission to Serbia, reminded that OSCE recognizes protection and respect of human rights as the core issue of security, therefore it acknowledges the need for creating special mechanism for addressing issues of human rights defenders within OSCE, as it was created in 2007, within ODIHR, Warsaw… 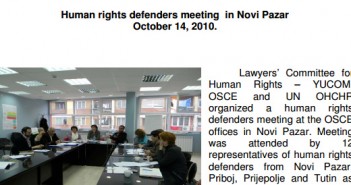 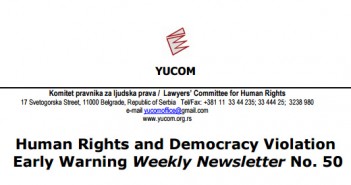 A meeting of human rights defenders was held in Nis, on July 7th 2010, organized by UNOHCHR, OCSE and YUCOM. The meeting was attended by epresentatives of the Nis Human Rights Center, the Niš Human Rights Committee, Network of Committees for Human Rights in Serbia – CHRIS, Committee for Human Rights from Leskovac, Women in Action from Velika Plana, Women for Peace and the Shelter for Women and Children Victims of Family Violence. 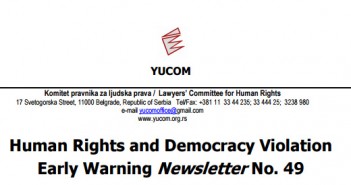 The annual survey by the Marketing Workshop, a student research group at the University of Belgrade School of Economics, has been published, with interesting some incites. The survey has been conducted annually since 2004, tracking student’s perspectives about the university, the education system and wider social issues. The 2010 survey was carried out between April 26th and 29th on a sample of 1500 students of all Belgrade university departments and schools. 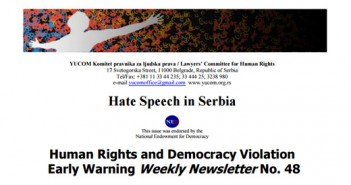 Lawyers’ Committee for Human Rights (YUCOM) and Helsinki Committee for Human Rifgts in Serbia (HOPS) filed with the District Attorney (Prosecutor) in Belgrade April 1, 2009 a lawsuit against Dobrica Ćosić1 , charging him with inciting ethnic, racial and religious hatred and intolerance, as stipulated by §317, para. 1, as well as by §387, para. 3 of the Penal Code of the Republic of Serbia, citing „Racial and other discrimination“, since in his book „The Time of Serpents – Writer’s Notes 1999-2000“ Dobrica Ćosić wrote about the Albanian people, inter alia 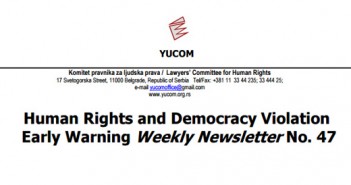 On the initiative of the Lawyers’ Committee for Human Rights – YUCOM – a consultative working meeting was held with the view to discuss the pace of implementation of three important pieces relating to human rights: Access to Public Information Act; Data Privacy Protection Act; and Document Classification Act.1 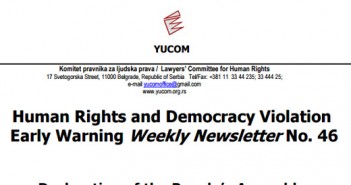 With 127 votes to 21 (out of the total of 250) the People’s Assembly (Parliament) of the Republic of Serbia adopted March 31, 2010 the Declaration on the Condemnation of the Crime in Srebrenica1. It is in this way that the supreme legislative body in Serbia made the first step in what could mark the beginning of a long process of confrontation with the legacy of the 1990s and grave crimes and other forms of violation of elementary human, civil and social rights not only of citizens of ex-Yugoslav Republics but indeed of Serbia herself, too. 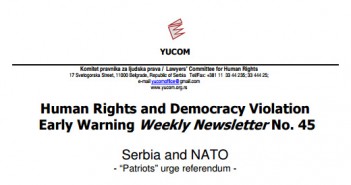 A group of over 200 “distinguished intellectuals1” signed a petition calling for a referendum on whether Serbia should join the North Atlantic Treaty Organization (NATO). The petition was presented to the public at a Jan. 11, 2010 press conference in Belgrade. The event featured a “troika” of distinguished public figures who put their literary, journalistic and scientific skills and oeuvre in the service of defending Serbia from any modernization attempts: Matija Beckovic, one of the most ardent advocates of Serb nationalist stance; 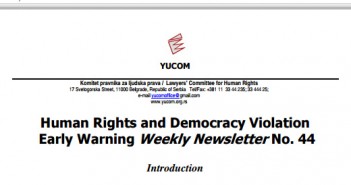 Within the framework of its publishing activity and its series Public Files – Against Oblivion, the Lawyers’ Committe for Human Rights (YUCOM) 2005 published a book titled “The Case of Public Servant Aleksandar Tijanic” – a publication consisting mainly of quotes from statements and commentaries the present General Manager of the state-owned Serban Broadcasting Corporation (RTS) published in various media over the period between 1976 and 2004. 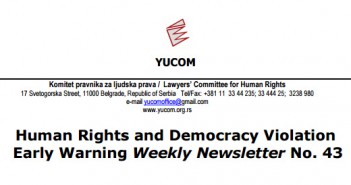 At its Aug. 31, 2009 session, the People’s Assembly of the Republic of Serbia passed the amended Law on public Information (hereinafter: LoPI) whose provisions provoked much turmoil in the public even before its adoption. It also caused bad blood in the ranks of the ruling coalition: since some of its member-parties refused to support the LoPI, the Goverment had to lobby for support among opposition parties and MPs. Unable to secure sufficient support and faced with a wave of public protest, the Government posponed the vote until late August.
The amended Law comes on this Sep. 8, 2009 into force.