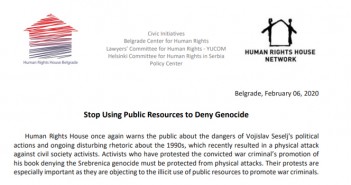 Human Rights House once again warns the public about the dangers of Vojislav Seselj’s political actions and ongoing disturbing rhetoric about the 1990s, which recently resulted in a physical attack against civil society activists. Activists who have protested the convicted war criminal’s promotion of his book denying the Srebrenica genocide must be protected from physical attacks. Their protests are especially important as they are objecting to the illicit use of public resources to promote war criminals.