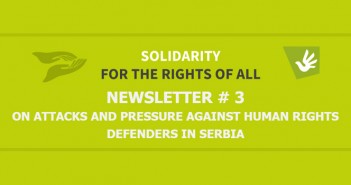 Newsletter # 3 On Attacks And Pressure Against Human Rights Defenders

Newsletter # 2 On Attacks And Pressure Against Human Rights Defenders 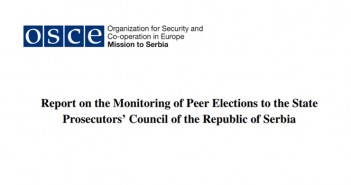 This report is the result of the OSCE Mission to Serbia’s (hereinafter: the OSCE Mission) efforts to monitor the peer elections of prosecutors  to the State Prosecutors’ Council (SPC), conducted from October to December 2020. The Serbian non-governmental organization YUCOM served as an implementing partner in monitoring the election. Activities included: monitoring peer elections across Serbia; analysing the underlying legal framework; and interviewing prosecutors who participated in the process.

Before the hearing, Yukom’s President Katarina Golubovic told N1 Vulin had continuously called Albanians „Shiptars“ (a pejorative term for Kosovo Albanians in Serbia) and insulted the dignity of the Albanian national minority in his former capacity of Defence Minister during the Belgrade – Pristina dialogue on the normalisation of relations. She said Serbia’s policy should not be based on hate speech. „We believe that we must point out that Serbia’s policy cannot be based on hate speech, especially towards the Albanian national minority. And particularly in the period when it is necessary to find a solution between Belgrade and Pristina,“ Golubovic told N1 outside the Belgrade Palace of Justice. 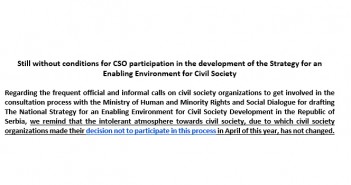 Regarding the frequent official and informal calls on civil society organizations to get involved in the consultation process with the Ministry of Human and Minority Rights and Social Dialogue for drafting The National Strategy for an Enabling Environment for Civil Society Development in the Republic of Serbia, we remind that the intolerant atmosphere towards civil society, due to which civil society organizations made their decision not to participate in this process in April of this year, has not changed.

Strengthening access to justice for women victims of violence in Serbia